I visited the historic tree known as El Lechero (Sapium glandulosum) located on a hill 9,340 ft. (2,847 m.) above sea level overlooking Otavalo in northern Ecuador. The tree has been an important ceremonial tree for the indigenous community of Pucará Alto and the greater indigenous population of Otavalo for many generations. Otavalo is well-known for its Indian market and the high quality, hand-made weavings and textiles produced there. El Lechero is also a significant tourist stop for visitors to Otavalo. Unfortunately, about a year ago El Lechero was damaged by a fire built next to the trunk and has been in decline. 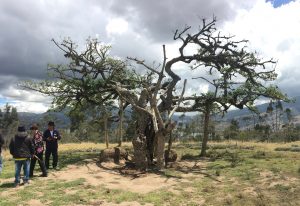 The site on the hill where El Lechero is located is wind-blown and cool. Although near the equator, the high altitude keeps the average annual temperature at 54 degrees F. (12 degrees C.) with daily high temperatures rarely exceeding 72 degrees F (22 degrees C.). The soil is a silty clay with some sand and has been compacted by years of foot traffic by tourists to look at the tree and indigenous people performing ritual ceremonies. The upper 2 to 5 cm (1 to 2 inches) of soil is heavily compacted making rains more likely to run off the site than soak into the soil.

I evaluated the tree’s health and separately the tree’s structural condition. Both health condition and structural condition are completely separate and independent conditions. Tree health is measured by leaf quantity, leaf color and overall crown opacity as well as the amount of sprout growth in each growth flush. Tree structure is evaluated by the absence or presence of structural defects such as cankers, cavities and the arrangement of branch connection at forks.

The structural condition of El Lechero, however, is poor because the trunk is so extensively compromised that it is in danger of falling apart. The trunk is a hollowed out half moon shape with a wall of live tissue that is approximately 4 to 5 cm thick (1.75 to 2 inches).

Fortunately, the community leaders realized the stability problems during the past year and have provided supports with posts made of living lechero wood. The rather magical trait of freshly cut lechero posts, even large posts, is that they easily root and become living trees. Living fences in the Andes are often made of lechero posts stuck in the ground. Consequently, several of these branch support posts placed around El Lechero have begun to root and grow. I demonstrated how to expose the cambium on the live posts and the live branches being supported and secure them together tightly to encourage the posts to graft onto the lateral branches. This technique would create a living support network of younger lechero trunks supporting the mother trunk (Figure 4).

In addition to providing support for El Lechero’s trunk, soil and root conditions have to be improved. Putting down a layer of organic mulch is the best and also least expensive way to improve the root space and provide more resources for the roots in the form of increased organic matter, humus and biota. The mulch material can be any organic matter in the form of wood chips, leaves, pine tree bark. But do not use any organic components from eucalyptus trees which can give off toxins that may harm El Lechero. This mulch layer should be approximately 5 to 7 cm. (2 to 3 inches) thick and should not be piled up against the trunk of the tree. As this organic layer decomposes, it will slowly improve the soil and provide a very subtle and gentle level of natural fertilizer for El Lechero. Too much mulch can inhibit the movement of rainfall into the roots. So be careful not to make the mulch layer too thick.

The mulch layer will not only help in reducing soil compaction but will also help cushion the soil from further compaction when there is occasional foot traffic near the trunk of El Lechero. I explained that foot traffic should be reduced and that could best be done by closing access to an area that has recently been fenced just outside the dripline and root zone of the tree. The fence made of living lechero posts and wire has already been constructed but there is a gate that should be locked and only opened for special events.

Avoid chemical fertilizers or even strong natural fertilizer concoctions commonly used in Ecuador. These mixtures normally stimulate foliage growth and can cause an imbalance between the root system and the foliage. Strong fertilizers, whether natural or chemical, can cause more damage to El Lechero than benefits. The problems El Lechero has are not fertilizer issues. Too much fertilizer can only complicate the recovery.

My assessment has been done on a pro bono basis without remuneration. Because my wife and I travel to Ecuador two times a year, we will be pleased to continue checking on El Lechero’s health and structure in the coming years.