Below are excerps from the City of St. Augustine Beach Tree Survey and Tree Risk Assessment. The data is from 2007 and 2008 so is not current. Wind storms, construction impacts and aging can change the risk assessment. But this information will provide a glimpse of the type of data that is gathered and how it can be used to manage a city’s urban forest. The detailed data sheets with maintenance information on each street tree can be obtained from the city manager’s office or by contacting us at one of the emails below on the footer of each page. 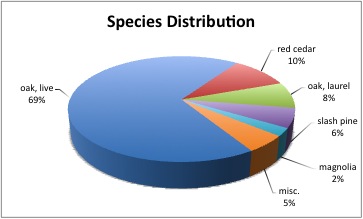 Below are excerps from the City of St. Augustine Beach Tree Survey and Tree Risk Assessment. The data is from 2007 and 2008 so is not current. Wind storms, construction impacts and aging can change the risk assessment. But this information will provide a glimpse of the type of data that is gathered and how it can be used to manage a city’s urban forest. The detailed data sheets with maintenance information on each street tree can be obtained from the city manager’s office or by contacting us at one of the emails below on the footer of each page. Summary The City of St. Augustine Beach has an abundance of beautiful, large Southern live oak (Quercus virginiana) trees on its public right-of-ways. Even some of the residential streets meander slightly to accommodate the trees and the benefits the trees provide. Maintenance has been generally good with the Public Works Department keeping an eye out for hazardous trees. The quality of pruning done by by the City’s hired contractors has been good too. This tree inventory and tree risk assessment is designed to help the city budget a regular maintenance program that is proactive based upon the most signiﬁcant problems observed.

Background In 2007 the St. Augustine Beach Beach Street Tree Board — which had in 2006 obtained an Urban and Community Forestry Grant from the State of Florida Division of Forestry to develop a Master Tree Plan for the City — recognized the need for a street tree inventory. Another Urban and Community Forestry Grant was applied for in 2007 and was obtained. Work on the street tree inventory began in December, 2007 with the bulk of the first phase of the work done in May and June, 2008. Additional grant funds were obtained from the Division of Forestry for phase 2 and that inventory work was completed during January through March, 2009. Purpose and Use of the Report The main purpose of the tree inventory draws attention to immediate tree problems and provides the starting point for a long-term management plan, which allows for effective use of tree care funds, and allows for more accurate budget projections.This tree inventory and tree risk assessment provides information on the species, size and condition of the street trees in the City of St. Augustine Beach. An additional beneﬁt is the City is on record as having risk assessment procedures in place and an on-going risk assessment program. Predominant Tree Species Tree Observations The predominant tree in the City is the live oak which comprises 69 percent of the street trees surveyed and the live oak population is relatively young. And that is good news. One of the best trees in Florida and in fact in the Southeastern United States is the live oak tree. It is strong, long-lived and beautiful. As described by University of Florida arboricultural researcher and professor, Dr. Ed Gilman, “A large, sprawling, picturesque tree, usually graced with Spanish moss and strongly reminiscent of the Old South, live oak is one of the broadest-spreading of the oaks, providing large areas of deep, inviting shade. And amazingly durable American native, it can measure it lifetime in centuries if properly located and care for in the landscape.” He goes on to say live oaks have a reputation for being a tough tree and have very good wind resistance.”2 The live oak wind resistant is documented by University of Florida studies of hurricane damage between 1991 and 2006 in a publication Assessing Damage and Restoring Trees After a Hurricane.3 Although there are a number of large, old live oaks in the City, the predominant size of live oak trees in the City of St. Augustine Beach is between 10 and 19 inches DBH, which means the City has a young population of live oaks, not an aging high-maintenance tree canopy. Tree Problems and Defects 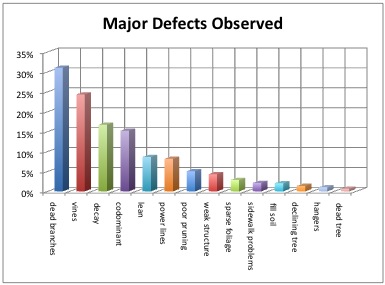 Dead Branches The most common problem observed was dead branches in the trees. Almost 30% of the trees had dead branches. Not all dead branches are hazardous but many are because a dead branch will eventually fall. Vines Another common problem are vines growing in trees. Over 24% of the trees surveyed had some level of vine growth. Excessive vine growth can hide decay and other structural problems from arborists and tree maintenance workers hired to look for potential problems. Vines can also increase leaf surface area which can increase wind drag and wind load on a tree during a storm event. And in extreme cases, vines cn overgrow a tree and smother it causing the tree to decline. Structural Problem The main structural problem I observed was codominant leaders. This is a condition where a tree has two or more vertical trunks. Sometimes a side branch begins growing aggressively and becomes a second leader or trunk. Codominant leaders are weaker under storm conditions than trees with a single leader. Another structural problem, multiple trunks, are trunks that are clustered together in groups of two, three or more. I found 15% of the trees have multiple trunks. Decay Another concern was tree decay. About 17% of the trees had apparent signs of decay such as cavities and cankers and were categorized as follows: • small amount of decay visible 8.1% • moderate amount of decay visible 6.2% • extensive amount of decay 2.5% Poor Pruning Work Only 3% of the trees had pruning done that was not up to current national pruning standards. Trees and Power Lines Trees near power lines were another problem. I observed 8% of the trees were very close to power lines and needed special care to avoid possible pruning damage by line clearing crews. Risk Assessment Regarding the risk assessment, only a relatively few trees had a score equal to 8 or greater which means they needed attention. Other trees without a hazard score greater than 8 had dead branches that needed immediate attention. These trees were indicated under the “urgency column” of the survey. Trees with high scores have already been brought to the attention of Public Works. Details of what the hazard score is and how it is calculated are available in the complete Tree Inventory on pages 4 and 5. The complete Tree Inventory is available at the St. Augustine Beach city manager’s office or you can obtain a copy in PDF format by requesting it from our email on the footer of every page of this website. Keep in mind the observations were made several years ago and the data is not up-to-date. In other words a tree with a relatively low hazard score on the data sheet may no longer have the same low score today because of aging, affects of severe weather, etc.

Tree Removals My tree risk assessment called for the removal of 11 trees because they were hazardous. Of these trees three were laurel oaks, three were red cedars, four were slash pine and one was a live oak. Additional Testing and Low Priority Removals I marked 21 trees for additional testing with a Resistograph. These trees had signs of signiﬁcant decay that could not be readily evaluated without more time and special testing equipment such as the Resistograph. I also marked 19 trees for probable removal in the future. These trees were not hazardous because there was no apparent signiﬁcant target but these trees were declining or unstable. In addition I also determined that 60 trees should be inspected annually. The problems ranged from the tendency of forming low hanging branches over the street to signs that branches would need end-weight reduction in the future. 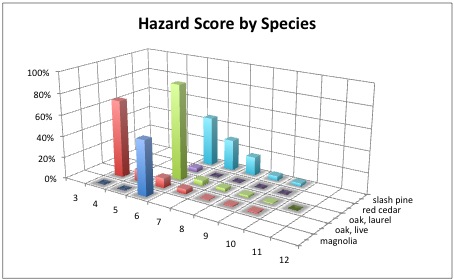